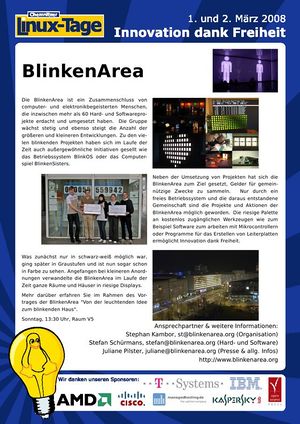 Linux Days take place annually at Chemnitz' University of Technology on first weekend in March (this year for the 10th time) and the BlinkenArea contributed this year by showcasting projects and giving lectures.

Lectures were given by:

In this lecture, I presented a way to make your software more flexible and powerful by embedding the LUA scripting language.

From a shiny idea to a blinking building

The BlinkenArea is a project group of people who developed more than 60 hard- and software projects. Apart from this, money is collected which flows into public welfare. The number of small and big projects rises and especially the pixel room TROIA as well as the display front bluebox are worth mentioning.

We were able to realise these projects only by a free operating system with open interfaces described in detail, the possibility to implement own drivers as well as to define formats and protocols. The lecture shall give an overview of the role Linux plays during the projects.

We were allowed to showcast a lot of BlinkenArea projects during the event. ArcadeMaxi, LittleLights, TroiCade, the TROIA_Prototype and the ColorCurtain were spread all over the building an the smaller projects could be seen at our stand at Live area (in German).

In the morning, I passed a test about microelectromechanical systems and mechanical engineering design. After that, I met ST, stefan and Berty in the building next door where the Linux Days take place and they had already started to build up the projects. Everything was very well prepared on the part of the organisers. Thus, we were able to focus on the projects and our stand. TroiCade took up most of the time because of the maintenence and we finished at about 2300.

At 1000 we (Charles, Stephan and I) arrived at the building called "Orangerie" of Chemnitz University of Technology where the Linux Days shall take place with three fully laden cars. Immediatly, five to ten people came to help us unpacking the cars. Shortly after that, Juliane get around and we started to build up our projects. The CLD organisers made a big car available to us and we were able to collect the missing material from the Blink-Garage and at a DIY store nearby, Charles and I got some needed roof battens. ArcadeMaxi, LittleLights, ColorCurtain and TROIA Prototype were built up in a little while. The next task was setting up TroiCade: sawing roof battens, drilling roof battens, testing pixel boxes, debugging pixel boxes (as usual, hmmpf!), screwing pixel boxes, aranging and wiring TroiCade piece by piece. In the meanwhile, the network team ran the LAN cables we had asked for and only a few configurations on the server were needed to make everything working. At the end of the day, we equipped our stand with some material and blinking devices. We felt very happy but also shattered when we arrived at Stephan's home (our "CLD2008 hotel") at 2300.

We arrived at about 1000 and had breakfast in the catering room for people who contribute something to Linux Days. This is a great offer for organisers, stand owner, lecturer and all the other helping hands. After that we met a lot of people at our stand placed near to the entrance which enables us to attract a great deal of attention. At 1300 ST started to moderate the series of lectures concerning law and legal questions. The first one was about the queasy topic online search by the government using a tool called "Bundes-Trojaner". After this lecture, I went back to attend to our stand and took another look-around at all the other stands. Stefan and I had a short break with some cake in the catering room and between two lectures, we brought ST some as well. After that, we made an appointment with a guy from TuxRadio for the next day. In the evening, we were invited to a come-together-party which emerged as a great reception with a tasty five-course-menu.

It is 0146 now and I finished the last slide for our presentation on sunday. Good night.

Linux Days were in full swing already when we arrived at 1000. The day before, we spend a lot of energy to build up the projects. I took everything nice and easy today, because I had no appointments or other commitments. I looked around at all the other showcased projects, optimised playlists and answered a lot of questions from interested people. One guy explained me that our projects with network link could not work in this way - this is how his arguments appeared to me. The blinking projects all around proved that black is white in this case. By the way, I looked through our presentation that was almost finished. Just some slides about TROIA were still missing and Stephan created them in the evening. Unfortunately, they did never arrive the non-volatile storage which shut down during the saving process.

The nights was definitely too short and I am very tired today. We arrived at 1030 and went to the catering room at first to get some breakfast. At 1100, Stefan went down to the RadioTux stand but the internet had broken down and no streaming was possible. Half an hour later, they fixed the error and Stefan and ST gave an interview about the BlinkenArea and blinking projects. At 1230, we looked through our slides together for the first and the last time and gave our lecture at 1330. We got some positiv feedback, some offers and some ideas. We will see where this will take us. Shortly before 1800, we started to clear up and to remove our projects. We finished at 2030 and I am completly worn out now.

I just started to handle the first photos for the lost slides when ST came in and told me that Juliane created them last night. Thus, we were ready to go and set off to Linux Days. Our interview at TuxRadio which we agreed the day before started a little bit behind the schedule because of some technical problems. After that, I prepared my notebook (desktop links, MPlayer, testing sound outout, changing resolution) and finished right before the lecture started. In general, it was well received, but we lost some listeners during my technical part. We decided to seperate the entertaining part from the technical one in the future. Then, people can decide whether they like to visit only one or both lectures. At the end of the day, we removed all our projects and cleaned up our stand. The big car we used on friday was available again and we could bring everything back to the garage very comfortable. We put the other things into our cars which got full to the brim. Thus, I had to carry the roof battens on the roof of my car, because we wanted to put them into the garage as well. Then, we went back to Stephan and we tried the Linux game CD Stephan bougth at Linux Days.

Everything was very well arranged and the organisers were very well equipped. It was a great event and the people enjoyed our projects. Hopefully, we get the possibility to participate again next year.