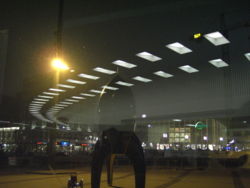 In fairy dust we trust!

24C3 Diary of the BlinkenArea 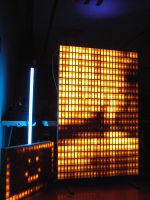 This year, everything should be very relaxed - at least for me as I decided. The organisers of the congress did not answer any emails containing offers to help, ideas for designing and project conceptions. Thus, there were nothing to prepare in the run-up to the congress - excepting ten blue fluorescent lamps (BlinkenArea Blog - in German) which we were allowed to contribute. Niob and I brought them into the bcc at 1530, checked and stored them in a corner of the hackcenter temporarily. stefan and sphaera had already arrived as well and we threw a glance at the room A04 together, which will be turned into the Hardware Hacking Room during the next days.

Apart from that, we got to see nothing interesting. Some carpet lay in the middle of the room which is called engine room and here and there a few sofas were standing around in the bcc. The upper floors looked the same. Only the POC was built up completely and ready. Business as usual. ;-)

Finally, we cleaned out our cars and started to unpack cased cables, lamps, blinking stuff and our BlinkenArea server. Tomorrow, we will get three special tables for soldering work and we can arrange our room on ourselves. We went home around 0130.

I did my first steps trough bcc an Berlin's Alexanderplatz this evening. Actually, we planned to had a look into the congress center on sunday, but the organisers did not answer any emails as ST wrote above and so we did not know, if it was possible to deliver first things, for example our blue lamps. Some groups started to built up their areas, other people fixed curtains in front of the doors against coldness outside. There is nothing special zu report about, but hopefully, everything will develop tomorrow.

We arrived at bcc at about 1100. It is a weary atmosphere which does not give the impression of a huge conference which takes part in here tomorrow. We wanted to contribute to the light installation at the hackcenter area but unfortunatley, we did not find anybody responsible for design and light. No coulored foil was available to cover the ceiling lamps and our blue fluorescent lamps had not been moved at all.

Hence, we attend to the BlinkenArea. We arranged tables and chairs, but we did not get any tables to solder on. Furthermore, we installed current and ethernet, decorated the room with different lamps, the "Pesthörnchen" flag and some other light foo.

Dauti and cavac arrived from Austria. The Blink-O-Mat was built up quickly and cavac worked on BlinkenSisters again. Niob, Stefan and I built up ArcadeMaxi, Littlelights, BlinkenLEDs and the BlinkenArea server. Furthermore, we registered our DECT phones at the POC. Towards evening, Arne arrived as well as some people of Das Labor and the Discordian Chaos Lab with a lot of beautyful projects. I am going to report about them within the next days.

Today, I am very lazy to write. Tables to do soldering work on them are still missing and will not come probably. Some orange lamps have been arranged at Hackcenter and our blue lamps disappeared, but are not in use anywhere.

Some seats are located in the middle of the Art & Beauty area which shall be "the bridge", I think. A few old lamp shades were fixed in the corners and something that looks like a machine was built up as well. It is very hard to interpret the message of all that stuff and to get the connection to the congress theme "Full steam ahead".

A pipe system made of paperbord was placed between some counterwindows in Level B which looks very lifelike but also semi-finished and poor, because it is not enough and no light has been installed. Thus, it does not come into one's own. Additionally, a great part of it is covered by a really ugly banner from the Indymedia people which I would avoid, if I had worked on that decoration for days.

I started to complete the page Projects, because there are some new projects which have not been listed, yet. Unfortunatly, a name for stefan's coloured blinking device was missing and I was not able to sort in something innominated. In the end, we decided to call it ColorCurtain and hopefully, its page will be completed soon.

The second try to attend a lecture just failed. Now, people are sitting around and listening to the lecture "Absurde Mathemathik" from Anoushirvan Dehghani by a livestream. Unfortunatly, I forgot to bring some headphones and I take advantage of the situation to write down some lines into our logfiles.

Since yesterday, some radical changes took place at the cafeteria - compared with the remaining atmosphere of a railway station all around at bcc. Three (!) green spotlights were added to the orange lamps a slide-projector shows a octopus. Nice. In the meantime, one can feel like part of the crew on a submarine waiting for the end to come, because the submarine is not able to come up anymore an on its front window, the octupus settled down. It is very hard to notice something about Full steam ahead!, although the current political situation got explosive and calls for self-engagement since our Federal President Horst Köhler signed the law which enables data retention in Germany without having any reservations related to the constitutional law.

For women, buying new clothes is always a experience which is worth mentioning. :-) ST and I went shopping at OpenBSD shop and bought two t-shirts with the nice blowfish on them. We decided to buy the apparent orange one for me, but when we came back to BlinkenArea and got out of the orange hackcenter light it suddenly turned into pink. Fortunately, it was possible to give it back and to get a black one.

A few minutes ago, a Netwatcher editor visited the BlinkenArea. Netwatcher is a variety radioshow at Vienna's free radio station Orange 94.0. We talked a little and I gave an interview about blinking projects. Again and again, people wonder about our new location at Hackcenter instead of Art&Beauty: "Why did they lock you up in the basement?" By now, I am sure it was a bad idea although it is very nice downstairs. It is very lame at the upper floors: bored atmosphere, no good looking light installation, no exciting projects, the decoration looks unfinished, it is cold and I feel not motivated.

Today, a spontaneous demonstration against surveillance and data retention took place at Berlin's Alexanderplatz. We got the information about two hours before the beginning. Niob, Stefan and I helped to spread a notice all over Hackcenter, the bcc staff announced the demonstration as well. At 7.30 pm, a lot of people met in front of the bcc. Then we went to Alexanderplatz where some people adressed the audience and returned to bcc after about 45 minutes. Hopefully, this event has any impact and the media reports about tomorrow.

pictures from the demonstration

ST and I were late today, because I went shopping with my mother in the morning. In the meantime, ST created the gallery with first photos and completed and improved this page as well. When we arrived at the congress, we decided to have a white coffee at first and had a look at the development of the bridge at the cafeteria. The octupus was replaced by a movie of a ray and a shoal.

After the demonstration ST reported about, I built up the LED-23 kit from Arne. I arranged the LEDs alternating instead of having single-coloured numbers as well.

Later on, I went to the FoeBuD where you can meet nice people and join in the conversation about interesting topics. Another guy came across who was reported to the police today, because he switched off some TVs at MediaMarkt at Alexa by his TV-B-Gone -- as a lot of the other congress participants as well who got the order to stay away from every German MediaMarkt for a certain time. Hopefully, some of the eye witnesses will please us with online reports about their experiences. :-)

There is nothing very exciting to write about at the end of day 4. The lamps which we brought along had been lying on the floor back in the Angelroom for the whole five days and therefore, we prepared them and delivered them at bcc in time. Great. The working team after the congress was in a hurry to clean up everything: during the closing event which we followed by the stream they disconnected switches and collected them by the telling argument that we could use the wireless lan. Bright.

Below the line, the Hardware Hacking Area was successfull due to nice people, showcasted projects and a lot of visitors. Streams of the lectures were available and more relaxed than halls full to bursting. As usual, the 24/7 was great, but the congress organisation seem to spiral downwards. It was almost unpossible to get in contact with anybody in the run-up to the event as Emails and Jabber emerged as a black hole. They declined offers to contribute to light installation and decoration pretending to have enough helping hands and no space for our projects. Everything turned into the opposite when we arrived at bcc: the upper floor was not a bit decorated, the "bridge" remained unfinished as well as the pipe system in the ground floor. A pity.