Difference between revisions of "TroiCadeEnglish" 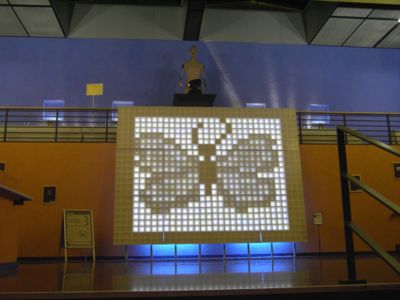 TroiCade is a small version of the major BlinkenArea project TROIA, that was initiated and supported by the European Union. Its subject was Technologies of Political Control, e.g. non-lethal weapons. Artists, architects, scientists, and engineers from seven countries were involved in working on it. A transportable building was designed in the dimensions 20m long, 12 m wide, and 6m high. The room within the building provided enough space for about 200 people and was tiled with 20096 pixels switchable in 128 greyscales on the walls and on the ceiling. The room became a stage for a live performance and a radioplay that were integrated with the displays inside the room. Furthermore, so called “Armpods” were randomly issued to visitors. These computers, that looked liked oversized USB sticks, were able to communicate with sensing elements attached to the ceiling.