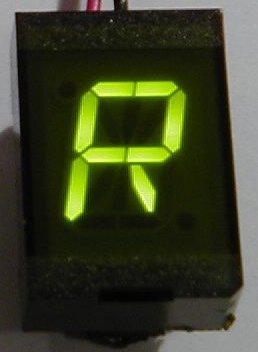 The "ornament" is a very simple blinking project consisting of only 2 parts and no circuit board. A microcontroller displays a sequence of letters on a 16 segment LED display, thus communicating a short text to the observer. The idea and the name were stolen from Evil Mad Scientist Laboratories, but the software is of my own making since I didn't like it that you couldn't change the displayed text at any time. 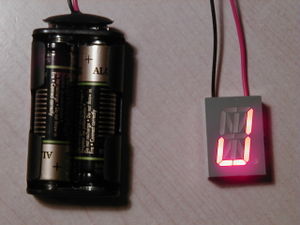 The software for my version is available in two variants - one for the old GDR displays (VQB201C, maybe others with similar names) and one for the slightly bigger Kingbright displays available nowadays. The text and the speed can be changed using a simple RS232 cable with no additional components, just connect ground and TxD to the AVR. Because of this very simple method, it is possible that the transmission may not work with all serial ports (the LED on the controller's input pin prevents the signal level reaching a low enough voltage when using a weak serial port - especially red displays are a problem here). Some ports also need a hardware handshaking simulation, you can achieve this by connecting pins 1, 4 and 6 as well as 7 and 8 together (pin numbers given for a 9-pin connector).

The text is being programmed by connecting the serial cable before applying power to the controller. If the text display starts anyway, either the contacts are interchanged or the serial port is too weak. If the connection succeeds, you can send the following commands with 1200 Baud (8 data bits, 1 stop bit):

<ENTER> means either <CR> or <LF> or even both (as an empty string will be ignored), <CTRL-D> can also be used. Instead of the uppercase letters, lowercase is also possible. The 3 digit values must be 3 digits long (use 010 instead of 10) and must be in the range of 001 to 255 (not checked by the software!). Other commands than the ones described above will be ignored.

Gallery of this project and OrnaMatrix.