Difference between revisions of "BlinkstroemAdvancedEnglish"

BlinkstroemAdvanced consists of only one board, which contains all components: power supply, microcontroller (Atmega16), SD/MMC slot and 144 LEDs.

In contrast to the first version (Blinkstroem) SD- and MMC cards are used as memory. To enable simple movie updates, the data of pictures are directly read out from a Fat16 filesystem, which is installed at the card.
With an easy modification, it is also possible to play MCUF-streams as long as no card is inserted. The stream is sent to the BlinkstroemAdvanced via RS232 (57600 Baud). You can use the UDPplayer software from version 1.2 on for this in windows.

If you're running Linux, you don't need any special software at all, just use this (thanks 1stein!):

Furthermore 8 greyscales can be shown, so that even Blinkenlights reloaded movies can be played. Unfortunately there are not a lot of greyscale movies in 144 pixel format (I have only 30). 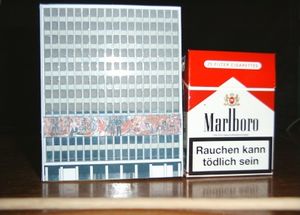 Information and files to build your own "Blinkström Advanced":